Cable TV is the last place you can look for if you're looking for the clean, accurate picture quality that 4K content gives you. Cable providers use QAM to offer multimedia content that is not supported by 4K channels. If you want the 4K experience, online services are the perfect path to take, but if you have a satellite connection you're still good to go. Now with the proper usage of LNB, DIRECTV, and DISH Network provide 4K quality. Yet, cable TV remains troublesome. However, there’s still a way if you're hooked on cable TV. Comcast Xfinity was one of the first among 4K cable providers to offer 4K coverage and others are well on their way to catch up fast.

What is 4K Ultra HD technology?

In a nutshell, 4 K Ultra HD is the name given to a television with a resolution that is four times that of a Regular (1080p) HD TV. This amounts to 8 million pixels being clutched into the same room in which a Full HD TV fits only 2 million — done by making each pixel four times smaller. The result? A better and clear image, accurate and consistent color and HDR for most new TV sets.

Because each pixel is smaller, and therefore it is given a small slice of a larger image, beefing up the resolution on smaller screens doesn't make a lot of sense — the additional pixels have a greater effect on a big screen as you can get all of them in.

In case you are wondering if Spectrum cable provides 4K content too, then the answer is yes! But not via digital cable though. The Spectrum Boxes sell cables with a resolution of up to 1080p at the moment. The highest you will be getting is 1080i. So, if you're trying to get the most out of your Spectrum connection, it's your best bet to access 4K content over the Internet.

What do you need?

To enjoy 4K channels, you'll be required to stream it, and to do so, you’ll need to register with the Spectrum 4K service. And, to watch Standard definition (SD) and High definition (HD) content, you'll need a DVR or a spectrum’s Set-Top Box and specifically, Apple TV 4K or 4th gen Apple TV would be needed for 4K quality content. You'll need to install the Spectrum 4K Apple TV application to stream 4K content on Apple TV. The Spectrum 4K application lets you access live channels and lots of 4K content from On Demand.

Setting up the Apple TV

The TV will identify the broadband network of Spectrum and sign in automatically to the Spectrum TV app and all the other services as well that you get from their service without even entering the login credentials when you try to set up the Apple TV 4K or 4th gen Apple TV for the first time. This is certainly an advantage that you don't have to sign up, each time! This app is also interlinked with the Apple TV application and Siri that allows you to watch movies, shows, and sports seamlessly across your Apple TV devices, iPad, and iPhone. You may also ask Siri to play movies, TV shows, and live channels on your TV with the Spectrum TV app 4K, using the Siri remote. 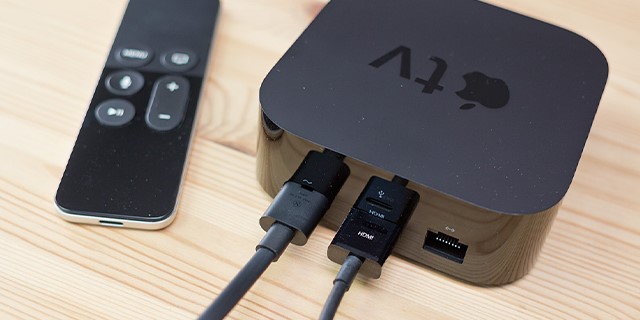 Keep in mind, Internet speeds from Spectrum are anything but steady. Spectrum was founded by merging 3 companies. Charter Communications bought TWC (Time Warner Cable) and also captured BHN (Bright House Networks) in a separate transaction around the same time. The Charter continued the business under the name of TWC after the merger, until it recently rebranded itself as Spectrum and began to operate its activities under this name. Anyways, it takes time for mergers to be completely reflected in corporate businesses and the same is expected to happen with Spectrum. Before the merger occurred each business had its own agenda and infrastructure. So internet speeds vary depending on the region. Once you get the Apple TV, you may want to make sure that your area's internet speed will keep up. Another downside you will find while using these services is that you won't be able to seamlessly toggle the channels between HD, SD, and 4K content. Moreover, you won't be able to record everything to the DVR either.

Would cable be able to takeover 4K anytime soon?

There are still many miles to go before cable TV becomes 4K entirely. Very few people have 4K TVs at the moment and that’s one of the main reasons cable providers are least interested in investing in 4K. Because none of the old systems can support 4K, it is very costly to set up a new channel chain for 4K broadcasting. A substantial amount of facilities would need to be replaced. Considering the fact that a significant majority of the audience is still unable to discern the difference between similarly viewed HD content and the real 4K content, broadcasters do not feel the need for 4K for the time being.

Besides this, the user experience is impaired when you film a video in 4K that travels quickly and is viewed in HD. This is due to the low temporal resolution compared to HD at the same frame rate. The size of the frame is much greater and so in the same period, the objects fly across more pixels. Even making shows in 4K is way expensive, because you need new cameras, new methods of lighting, and different sets. The only reason companies are investing is mostly because it provides a better rate of return for sports and movie networks. That, in turn, generates higher revenues.

Top Internet and TV Deals for 2020

Everything you need to know about ESPN plus in 2020

Top Internet and TV Deals for 2020

Everything you need to know about ESPN plus in 2020

What are the best internet providers in Los Angeles?