A Step-by-Step Guide to Program an RCA Universal Remote

It is a natural urge.

They want to command the processes around them in order to maximize their convenience and minimize their effort. Technology helps make this dream a reality. Where before people had to strive to manage their home entertainment units, now they can simply pull the strings in one shot with the help of a ‘universal remote control’.

This slick gadget collects the functions of multiple devices such as a TV set, a DVD player, or a gaming console and places them right in the user’s hand. It is an all-in-one control solution. Therein lies its appeal.

However, such an advanced mechanism has an equally complex structure. Meaning, since it controls almost everything, a universal TV remote has an extra set of buttons and operations, which are not easy to understand for an average consumer.

This is where the present post becomes relevant. It promises to take you through the general meaning of a universal remote control and down to the specifics of how to program an RCA universal remote on your own. Keep reading and follow the step-wise instructions to power up your RCA remote like a pro.

Nearly every home entertainment product comes with a dedicated remote control. More often than not, such a remote handles the programming of that one device only. There are, however, certain TV remotes in the market, which let you control more than one device within the same brand. For instance, if you have an LG TV and an LG Blu-ray disc player, you can operate them both from the same remote. But, this is not enough for consumers.

They wish to go beyond the same-brand control and maneuver multiple devices across different brands using one magical tool. That is why they crave for a universal TV remote.

What is a universal remote control or URC? The word ‘universal’ implies ‘applicable to all’. So, a universal remote is a single mechanism, which connects with and controls numerous home entertainment devices in the vicinity. It removes the need for having separate remotes for individual appliances. Some universal remotes have buttons, while others have a touchscreen interface.

What sort of tasks can you perform with a universal TV remote? There are simple command types, like changing the channels, adjusting volume, choosing inputs, altering the sound & picture quality of a display, and exploring the playback features. Then, there complex command types, such as turning the TV on, selecting the home theatre input, switching the home theatre receiver on, choosing the source, starting the playback, adjusting the room lights and the thermostat – all from the push of a single button.

How does a universal remote acquire the ability to control a device? Most of the URCs have a built-in programming system, which allows them to recognize the products that the user wants to connect and control. It comes in four shapes:

How does a universal remote connect with a target device and communicate the commands? Again, there are four ways:

What are the pros and cons of having a universal remote control? Let’s check them out:

A universal remote control makes human life easier. It gives you the ability to operate more than one home entertainment products and other gear from a single, stress-free standpoint. It comes with different programming options, communication channels, and command types, depending on the manufacturer. The fact remains that it is a handy gadget, which you definitely try once in a lifetime.

RCA or Radio Corporation of America has been around for a hundred years or so. Throughout the years, this iconic brand has made huge waves in the technological arena with its next-level products. It has fostered a reputation among the masses based on quality and reliability of service, which is why we have chosen its universal remote control as the central point of this post. Before we can move on to the features, a brief historical journey of the brand might shed more light on its importance.

Features of an RCA Universal Remote

Now that you’ve gone through the history of RCA, you can see why it’s the best choice there is for a universal remote. If you have purchased a remote from RCA already or are looking to buy, then knowing about the features and functions of the remote might help further clarify its utility. Here are some of the most important keys on an average RCA remote:

These are the generic features, which you will find on any top-shelf RCA universal remote. Recognize them and know their functionality to prepare yourself better for the actual programming phase, which is coming up next.

How to Program an RCA Universal Remote?

Unless you have a TV provider like Cox Cable which offers a Voice Remote with multi-tasking capability alongside its plans, your best bet is to invest in a universal remote control from RCA. Why? Because with such a holistic tool, you can operate up to eight devices at once without having to store separate remote controls in drawers. But before you can get a taste of the state-of-the-art management technology, you need to set it up. Programming an RCA universal remote might sound like rocket science, but in reality, it is as simple as pie if only you have a knack for following instructions properly.

What You Need Beforehand

In order to program RCA universal remote, you need to have these items by your side:

Here are two tried-and-tested ways you can program your universal remote control from RCA to control the home entertainment devices in your living room.

How to Program with ‘Manual Code Search’?

This method is fast and relies on Direct Code Entry, but requires the most effort on your part since you have to manually look up each brand’s code and enter that while programming the remote. In case you decide to utilize this method while setting up, be sure to consider the following instructions.

Manual Mode 1.1: For an RCA Remote without a Code Search Button 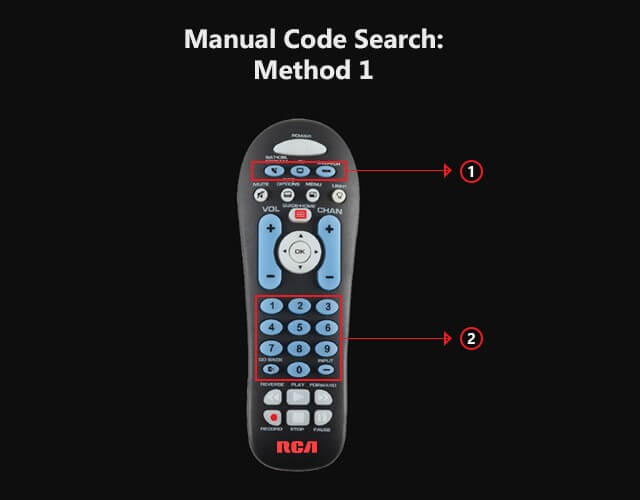 Manual Mode 1.2: For an RCA Remote with a Code Search Button 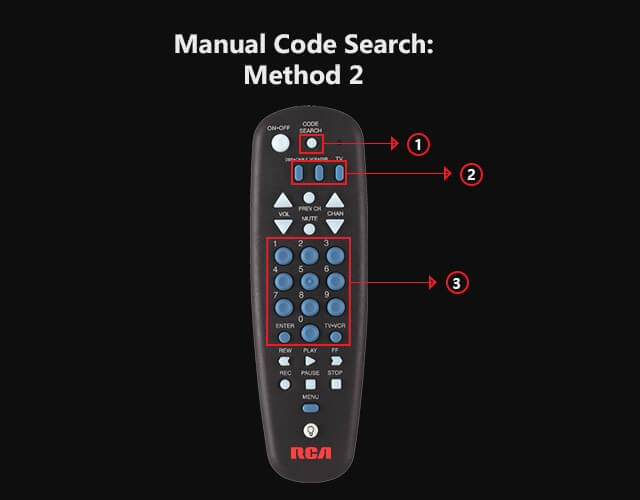 How to Program with ‘Auto Code Search’?

This method is relatively slow but it lets the remote do all the hard work. In other words, you don’t have to do a manual code search here. If Auto Code Search sounds better to you, then use the following instructions to program your remote.

Auto Mode 2.1: For an RCA Remote without a Code Search Button 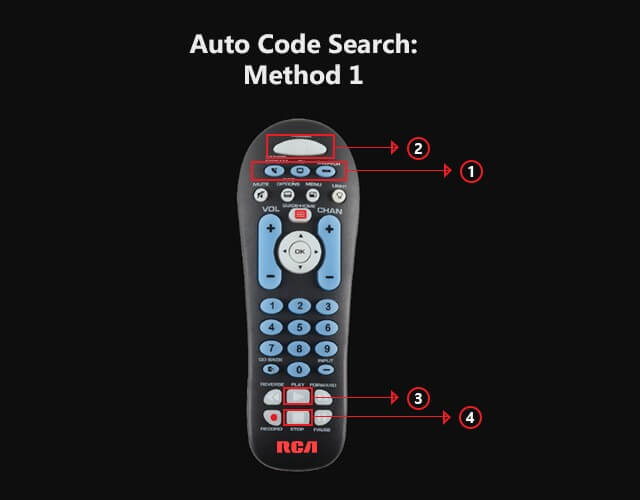 Auto Mode 2.2: For an RCA Remote with a Code Search Button 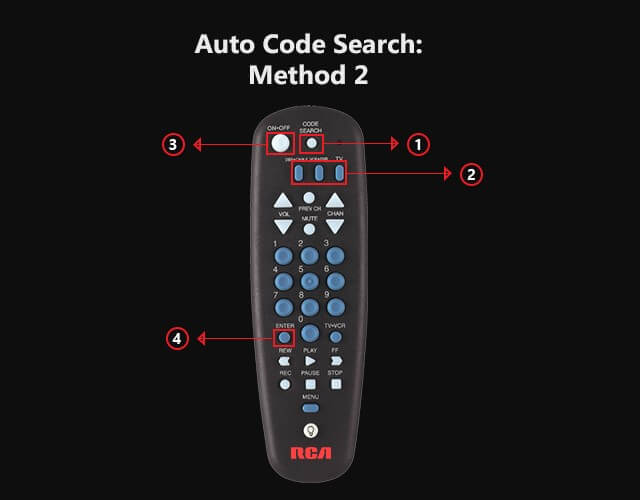 Where can I get an RCA universal remote control?

Amazon, Best Buy and Walmart host the latest varieties of RCA universal remotes, and under $25 only! You can place your order online and expect the fastest delivery by getting an equally fast connection from the best internet providers in your area.

Are DirecTV remotes universal and better than RCA?

Some DirecTV remote models do have universal control capabilities, allowing you to access up to 4 home entertainment units, unlike RCA which powers up to 8. There are guides to help you set up and program DirecTV remote, pretty much like this one.

Yes. You can link and control your Comcast cable box with an RCA remote. Although Xfinity TV plans come with their own Voice Activated remote having a touchscreen interface, you can set it aside for an all-in-one control.

How do I find my Samsung TV remote codes with RCA?

You can find RCA universal remote codes for Samsung TV in any of these three ways:

A universal remote control is a wonderful feat of technology that brings nothing but convenience in the house, as this post already shows you. RCA is a well-reputed company and its brand of universal remotes is definitely worth trying. Setting up and pairing the remote control may look challenging if you’ve never done it before, but with the help of this guide, you can achieve this milestone in a short time. Give the Manual Search or Auto-Search methods a shot while practicing patience and you’ll thank us for it.